We have partnered with Deko Finance to offer you an excellent range of Finance Options. Simply use the calculator under the product price! 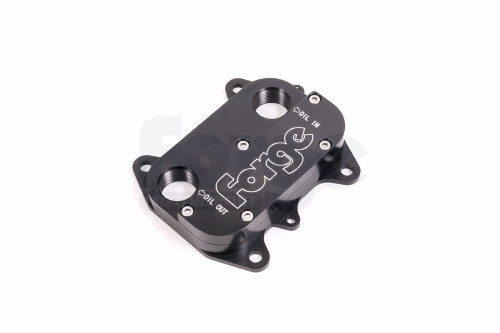 The oil filter housing on modern VAG engines does not allow for the previously common takeoff plates to fit under the filter and divert oil into an oil cooler mounted elsewhere on the vehicle. Instead they now use a oil to water cooling ‘block’ bolted to the front of the engine, and in many cases an undersize filter, or a paper drop in element, which prevents easy fitting of an oil cooler. As many people have found, if the vehicle is tuned, or if it is towing a heavy load, oil temperatures can rocket, with oil temperatures over 120°C (250°F) being easily achieved, which is close to the point that engine oil starts to break down.

The Forge Motorsport FMOC2 replaces the oil to water cooling block, and although it still allows coolant to circulate, it more importantly gives two M22 takeoffs which, when fitted with the appropriate adaptor, allow fitment of oil cooler lines between an -6 and an -10 in size (not supplied) which can then be attached to an external oil cooler. Oil temperatures are stabilised, and engines can be worked harder for longer.

To confirm fitment, please check the list of compatible vehilces below.

For European Customers prices now displayed in cart once you enter your address will have 20% UK VAT Tax removed, however you will have to pay some form of Duties / VAT prior to delivery of your goods. If you are unsure of charges we recommend you should contact your local authorities ahead of placing your order.

Yes we do, to almost anywhere in the world though remember the postage is often high when shipping anything bulky. Most bulky items we export will go by UPS so you can track the package online and could reach America within 48 hours providing its in stock !

However there are a few countries we do not ship to, some of these include: Thailand, Malaysia, Indonesia, Russia, Nigeria, Macedonia, Syria, Ukraine, Lebanon.

For both yours and our safety we use well known couriers such as DPD Local and UPS for shipping, then we know exactly where it is in the world at any time and we know its going to arrive safely. Shipping small items can be cheap, but items such as bodykits are expensive to ship - we have a very small margin on the postage fees merely to cover packaging. We can now ship using standard post on some items, however using all methods you may incur import charges when you receive the goods for which we cant be responsible for.

Not everything on our website is in stock, if you need a part desperately please contact us first to confirm availability before placing your order

You can order online or by emailing us. email: sales@awesomegti.com