Is reprogramming of the DSG really needed?
Besides good DSG software, the engine software needs special modifications as well. The DSG-engine communicates over 8 can.bus channels. Therefore we strongly suggest to buy engine software and DSG software as a package.
What will happen if I don't re-program my DSG?
-Clutch slip may occur, even though not always clearly noticeable. After roughly 6-24 months the clutch-slip tends to get higher and higher. The slip is mostly noticeable at +/-2000rpm when the turbo “kicks in”.
-Torque is limited to +/- 350Nm. The DSG “measures” 1) the actual torque, and 2) the engine ECU sends out a torque signal through the CAN-BUS. If one of these 2 torque levels exceeds 350Nm, the DSG will interact by reducing engine power. Some tuners deactivate, or better: ‘try’, to deactivate this function in the engine ECU.
In other words: The safety functions are deactivated, so no power reducing when overstressing the gearbox. Result: The gearbox or clutch will break down. Therefore we strongly advice to keep these functions intact to avoid clutch slip/wear. And use DSG software instead of disabling the safety functions through modifications in the Engine software.
-Rough incorrect shifting may occur, mostly at full throttle. Launch controls are slower and there are some more symptoms. This is simply because the parameters in DSG are set for low torque values only.
Software ‘modification’ or ‘full re-programming’?
TVS offers a full TVS file solution. The original software ID will be stored on our database, but the original software itself will not be re-used for our calibration. (what 99% of tuners normally do). This avoids the common bugs & problems with the numerous factory update’s. TVS-engineering’s workshop encounters these update problems every day. 2000 DSG repairs per year help us learning what files to use, or not to use.

The DQ200 is the first and only 7 speed DSG with a dry clutch. These gearboxes are known to have a lot of issues, especially compared to his predecessor the DQ250. The most common issue is the excessive wear of the clutch. In 2011, TVS-Engineering has developed special software to prevent this issue. Without this software the gearbox will be damaged for sure. The DQ200 can handle up to 350 hp and 420 Nm. (With TVS/DSG software) 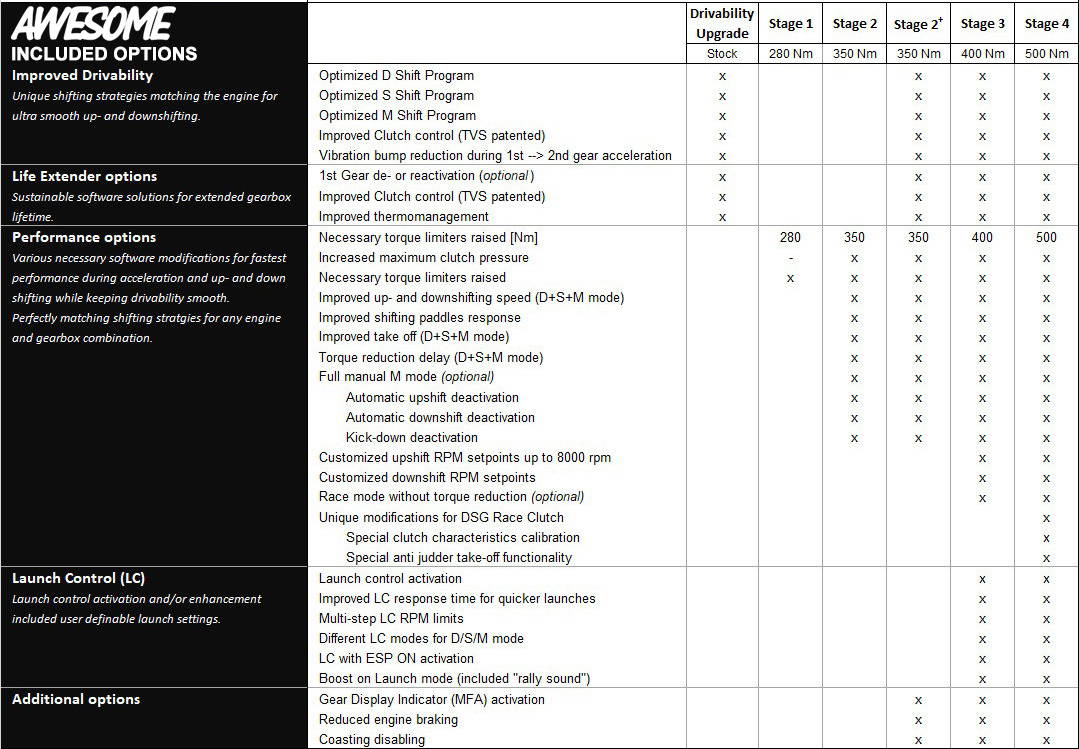 The DQ250 gearbox, also known as 02E, is the first DSG gearbox from Volkswagen. Used since 2003 until present day and barely updated. This gearbox is known as strong and reliable. 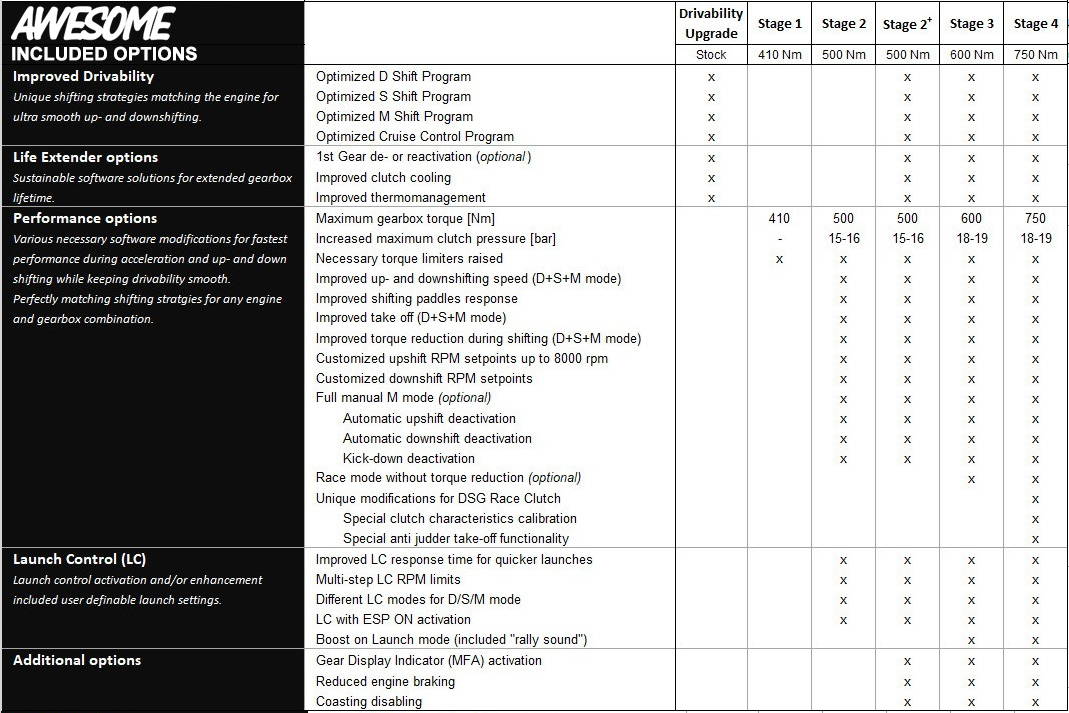 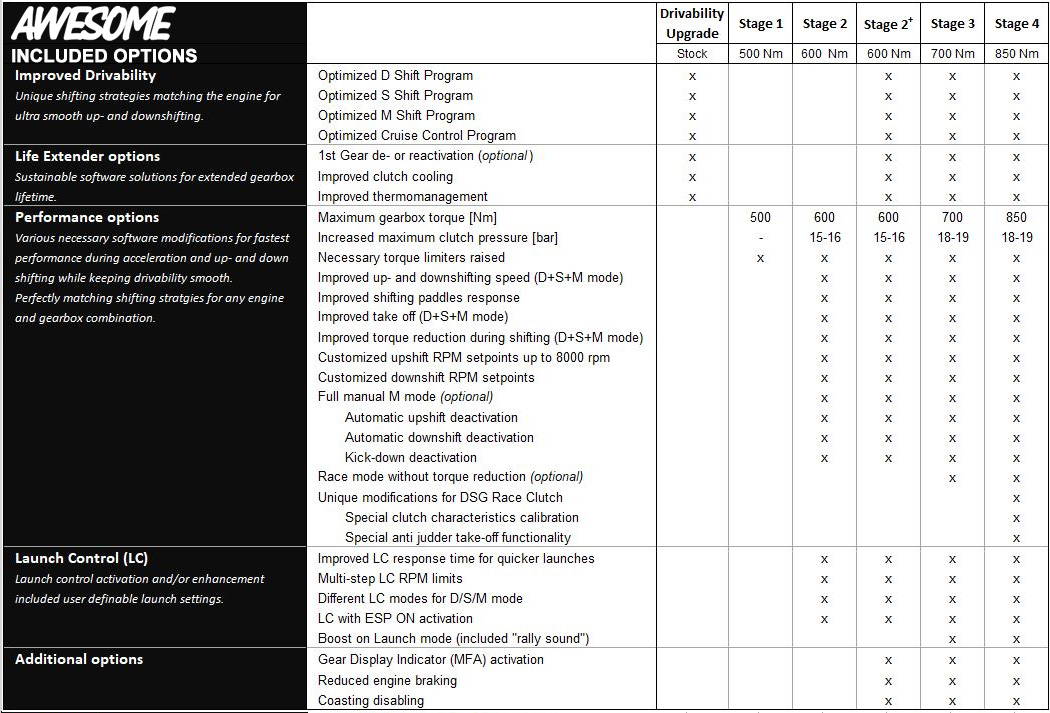 6-speed hybrid mainly used in the golf 7 GTE and Audi A3 E-tron.

This 6-speed transmission has a modified clutch housing, to create extra space for the hybrid electromotor. The gearbox is bounded to a 1.4 TSI engine.
The Jetta 1.4 TSI hybrid uses a completely different 7-speed DSG.

Mostly used in VW Transporter from 2009- until now, Audi RS3/TT-RS, Audi Q3 and VW Tiguan. The DQ500 gearbox is the strongest transversal DSG within the VAG concern. Therefore, this one is used on heavier vehicles and models with high power. 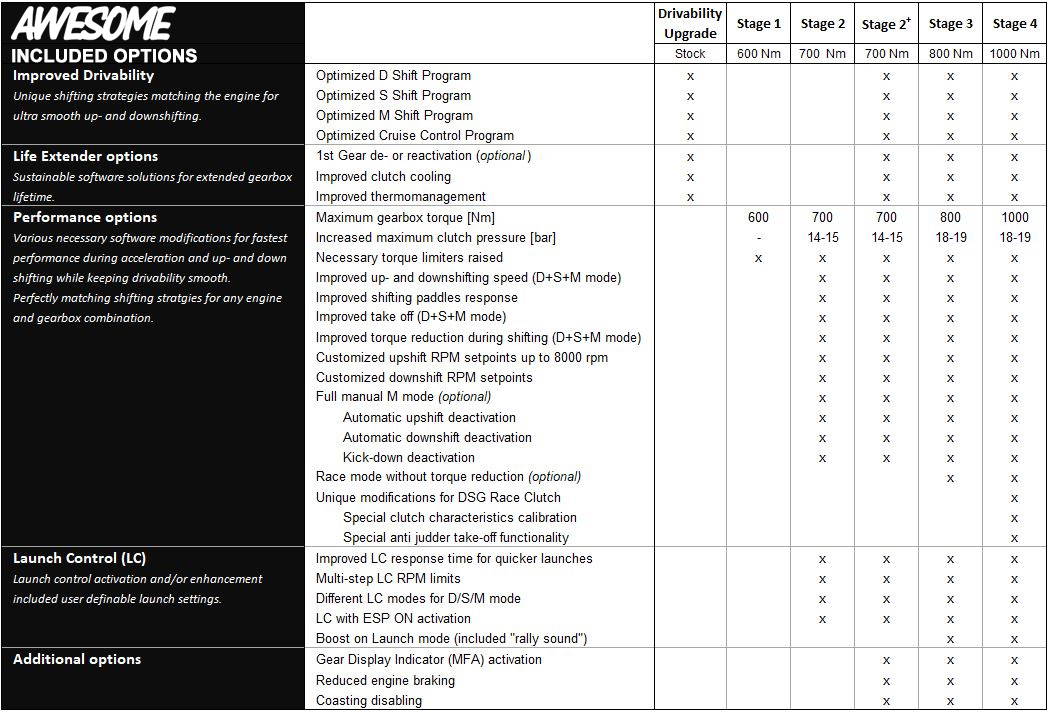 The DL501 is the strongest S-tronic (=DSG) gearbox on the market. Audi designed this gearbox to handle up to 1000Nm of torque at an engine speed of 10.000 rpm. Despite this, the DSG has a lot of issues, especially those produced between 2009 and 2013. The issues are fixable, after some modifications your gearbox should be problem free.

Some unsolvable complaints can be fixed with the use of the unique software from TVS-Engineering. 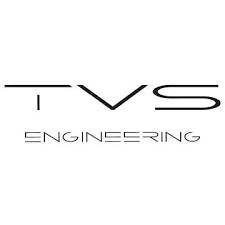